Events That Occurred in 1930's 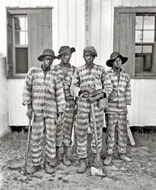 “1930s fashion as well as all other aspects of normality were profoundly changed.” by Marie Claire,(1) This can possibly be because of the variety of fashion, where no one stuck to one style during this decade.  For example, many children’s play clothes were ragged and beat up. Clothing for men consisted of a superman look built in with broad shoulders; women on the other hand liked to wear dresses and lots of fur coats in the winter. Prisoner outfits were baggy with horizontal stripes along the outfit and sometime a hat was worn. These examples illustrate that the clothing in the 1930's were made with ideal styles for different situations.

To start children's’ clothing had many different styles, the play clothes for boys were overalls and coveralls that were worn.(2) They could have also worn old clothes with holes and that are torn as well. According to Types of Clothing That Kids Would Have Worn in the 1930's By Teresa O'Hanlon, “Younger girls favored a Shirley Temple look with high-hemmed, floral, plaid or solid-colored dresses and ankle socks.” (3) Also casual fashion for girls was a Shirley temple look and in the summer were shorts and weekend rompers. Boys had also worn cotton and corduroy shorts sets called suits, formal clothes they wear are suits but with pants instead of shorts.(4) This shows that boys and girls have lots of clothing items for their different situations. Also due to the events going on during this time some children had a limited amount of clothes they wear.

To add men and women's clothes had changed during the 1930's. Most of men's clothing consisted of a stronger superman type of look, there was a small curve in most suits to make their shoulders look broad.(5) Women used to wear lots of dresses and skirt, also during the winter fur coats and scarves were very popular.(6) ”Men's fashion of the 1930's reflected an upscale spirit that tended to change with fluctuating economic climates and world affairs.” This quote by Tanya Sharma from Fashion of The 1930's,(7)  means that the fashion had changed due to the economical flaws and the appeal to people during that time. Men had also sometimes had worn a hat called a fedora. Many clothes for men had changed due to the appeal to others during economic changes and different climates.

To continue prison outfits had not changed much throughout the 1930’s. The prisoner outfits that run black and white stripes going horizontally across the uniform.(8) Sometimes prisoners had worn a hat to match the uniforms. “They all wore black and white uniforms covered in stripes that symbolized prison bars.” by Christina Garton from A History of Prison Stripes,(9) this basically shows what their outfits meant back then and serves as a symbol of why they were put there. The outfits were also very large and baggy once they were worn.(10) During the 1930s many of the prison uniforms had not changed until after that generation of clothing.

To finalize the clothing items in the 1930s were mostly made with ideal styles for lots of situations. There were many styles for men, women, children and prisoners and there were many styles for each except prisoners. Men strive for a superman look with broad shoulders. Women wore lots of dresses and skirts and during the winter they liked to wear lots of fur clothing. Girls favored a Shirley temple look and boys wore overalls and coveralls were their play clothes or old and beat up ones. Prison uniforms were poorly made and not a very ideal look. Clothing in the 1930's was a forgotten period of fashion though many people thought it was stylish but, eventually they grew out of it. There were also many economic issues so not many people had the money to buy lots of clothes. To conclude due to the economic issues and changes the 1930’s were a forgotten period of fashion.