1930’s Inventions of the Past
Thomas A. Edison, an inventor, once stated, “To invent, you need a good imagination and a pile of junk.” This shows that only one can event something as long as they believe they can do it. Many inventors illustrated this concept during the 1930s.  For example, the cookie is a delicious invention that was made during that decade and the pinball machine was an invention that was changed often till it final design. Lastly, Monopoly was a board game that was underestimated as a game. Because of the imagination of many people, the 1930s inventions were inspiring.
To begin, the cookie was a delicious invention. In the article, “What Were Some Inventions of the 1930s Ellie Gambrel", Ruth Wakefield invented the chocolate chip cookie as well as chocolate chips in 1931.  Here it talks about how the chocolate chip and the cookie were made at the same year. In the article, “History Of Cookies, What's Cooking America.” The cookie originated from Whitman, Massachusetts in Toll House Restaurant. The location for the first cookies that were made and how this cookie was actually made in a restaurant to start out. In the same passage it says how cookies started to spread around when  she made different her second kind of cookie. After her second cookie people saw there were different kinds of cookie it made them interested in what other kinds could be made. This is why cookie are a interesting food to be invented.
​

Next, we have a very popular machine at restaurants and in gaming places its called pinball "The History of Pinball and Pinball Machines - ThoughtCo. Mary Bellis”,   Pinball was first invented in 1931, but it was not originally called Pinball. The first name was Bingo the second was Baffle ball and the final one was Ballyhoo it was not called Pinball till 1936. In the same article, the pinball machine was made by as a counter to machine. This is a pinball machine with no legs just the score and the board. In “Who Invented the Pinball Machine, Marc Zorn” In 1931 the first person to make a pinball machine is named Bingo Novelty Company. This is why one of the names for pinball was Bingo. This was some history about the pinball machine.
​ 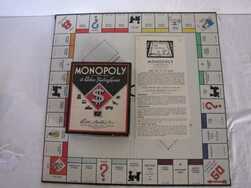 Finally, monopoly is a game that was look down upon. In “Who was the real inventor of Monopoly, Lulu Morris” It was Charles Darrow was created monopoly not The Parker Brother. He actually ends up selling it to the Parker Brothers after see how good it was doing because they didn’t like the game at first. In the article “The Monopoly Board Game (1930’s), Mortal Journey” The game was first sold as a game that was handmade and written. With help from his friend that was a printer they sold over 200 handmade copies. Also from the same passage it talks about how  his game got rejected a lot of times for being to complicated and long. Nobody paid any attention to the game till he sold over 500 copies. This is why monopoly was a over looked game.
To rap up this is why because of the imagination of people in the 1930’s were amazing inventions. This is why the cookie was one of the most delicious inventions. Also the back story of evolution of the electric pinball. Then how Monopoly was an under looked game to companies. These are just some of the amazing invention the 1930’s has to offer.